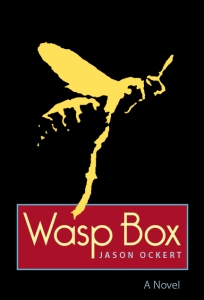 “Wasp Box is a thrilling debut that will no doubt soon garner lots of positive attention from readers and critics alike. It is that rare novel that manages to be profound while also being profoundly entertaining.” – Wraparound South

“What develops in Wasp Box is horrific, beautiful, bizarre, poignant and mesmerizing. The sensory and visceral detail will cause readers to claw at their legs and necks, jam fingers into their ears, or hop on one foot to shake from the head what may lurk inside. Wasp Box portrays families at their best and worst, strongest and weakest, closest and most distant. Above all, it offers a portrait of the resilience and reliance necessary to survive.” – The Rumpus

“Jason Ockert’s first novel is strangely magnificent. Deep down, Wasp Box is a love story: A soldier searches for a way to come home to his sweetheart, a man attempts to be a better father to his son, a quiet boy and an odd girl find companionship in each other and an old man struggles to cope without his deceased wife. But it’s also a story filled with a quiet, lurking dread. It touches on the fear that lives inside all of us, a fear that literally surfaces when a soldier returned from war births a swarm of parasitic wasps that have been nesting in his brain, feeding on his insides. Are you cringing yet? Good. Those are just the first two pages.” – Bookslut

“At 179 tight pages, Wasp Box is an argument for the short novel in the vein of The Burning House by Paul Lisicky and A Good Day to Die by Jim Harrison. There’s not an ounce of bloat in this book. Ockert’s masterful usage of first person contributes to the story’s immediacy. Ockert suggests that the wasps’ agitation merely elevate the swarm that resides within all of us. By exercising control over his prose and his content — by making the focus of the book how Hudson’s search for independence pushes against his father’s desire to strengthen their relationship — Ockert manages to tell a narrow tale that pulses wide.” — The Millions

“The novel is at once a profound commentary on the human condition in America at the moment and a bona fide case of the heebie-jeebies between covers.” — Fiction Writers Review