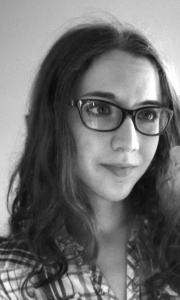 Maggie Colvett is a literature M.A. candidate at the University of Georgia. Her poems have appeared in Colorado Review, Hayden’s Ferry Review, Radar Poetry, Still: The Journal, and Architrave Press’s broadside series, among other places. She edited volume 41 of The Mockingbird, the arts and literature magazine of East Tennessee State University. A collection of her poems titled The World by Memory and Conjecture was awarded ETSU’s Undergraduate Honors Thesis Prize in the Humanities for outstanding work in any humanities discipline. She lives in Athens, GA and Piney Flats, TN, where her family keeps many dozens of chickens.

After the Weight of the Snow

Gray fields, gray sky. No glint on the rocks in the pasture.
Grass curled to white bristles. Ground under it
muddied and blurred, turning colors like a bruise.
The neighbor’s calves who came to the fence to meet me
are grown and gone, and the jimsonweed gives no smell
from its hollow maces. Wind whips the gatechain.
The last of last year’s garden scuttles across the yard,
lighter than wind now. A few sunflowers hang by their roots,
slumped on the high fence, heads swaying wearily.
This March has been getting to them. By their feet,
an old okra pod, overgrown and left to the weather,
has dried to white paper, cracked down its flutes,
and bloomed like a bird of paradise. Write me already,
I’m sick of repeating all of this to you. I need someone
to stand at the gate with me. To steady the watching.
It’s going to rain soon. The light is straining with it.

In Berlin all week
because the trains to Warsaw
don’t run on Easter Sunday,
I was measured by streetlights
nimbused in falling snow.
I moved quickly and alone,
drawing out their blue
and silver streaks
under the faint red eyes
of narrow towers.
Day and night the clouds
assumed an identical gray,
muting the sun behind
to a constant dimness,
diffusing the lights below
to a ghostly brightness.
Closed in by the low,
dark sky, the streets,
glassed with slush
and dirty water,
mirrored those lights such
that the space below my feet
seemed larger than
the space above them,
a doubled city, hanging secret
and untouchable.

City trains the only lights
I could cross into,
the longest rides
always late at night,
in the direction
I already thought of as home,
toward Ostkreuz.
In the still, bright interior
of the S-Bahn,
I formed my throat
around the names of stations,
not exhaling, though
they still came out like whispers:
Ostbahnhof, Südkreuz,
Potsdamer Platz — names
I could nearly see into,
but not quite penetrate,
each with a heavy, hard-edged grace
like the laid tile signs
that announced old platforms
in shimmering blackletter.

During the long divide,
I’ve read, there were stations
where old rails obliged
the western trains to pass,
where the platform
rolled by without stopping,
unlit, silent,
serious with guards.

In the still, bright place
with changes still to go,
I whispered Südkreuz.

I whispered
so it wouldn’t disappear.

It rained all summer in Tennessee.
Driving back from Johnson City,
making the usual turns
on Austin Springs,
where the road snakes over
and pavement breaks
near the Sullivan County line,

I met a storm,
and the passage flooded.

In sliding hills,
I couldn’t see past the bends
or through the trees,
though the mountains
I moved toward must have
been where they always
were, horizon folding
and folding as ever,
out of my sight, unaffected.
No shoulder on that narrow road:
to the left, sheared rock,
to the right, the ditch,
and I had to drive.

Keeping the way by signs—
Deer Path and Copper Hill,
Cash Hollow, Candle Knob—
I fixed my spine upright.
The still, bright place
is smaller than my body, now;
I cannot move around inside it.
I held it in my ribs.

Headlights lost in water,
I clutched the wheel,
and to the dark and pounding night
recited Südkreuz.

One winter in Manchester,
I had a room behind the city’s
central station, where the railways
split and spread like vines,
sprawling out between the buildings
on high trellises. Someone
leaving for Plymouth or Swansea
might have glanced out and seen me:
a hand from the seventh floor
checking for rain in the morning,
or, later, the glow of a lamp
through flimsy blinds. I didn’t mind
the sound, a nightly presence
all my life in Tennessee, familiar
and lulling as crickets. Only once
it startled me awake: a giant
roaring at four or five—a helicopter,
I guessed at first, or an earthquake—
but worth getting up for, whatever
it was. Just past the window,
an unreally massive freight train
was dragging itself down the rails,
grinding at them with a terrible
grumble and screel, its wheels
pouring sparks as though every car
were strapped with fireworks,
and the force of them all was barely
enough to roll the train forward.
It must be the brakes, I thought,
but the train kept coming, the sparks
kept streaming—a sharp, hard orange
like a sunset through rifts in dark
clouds—and that grinding echoed
in alley walls, doubled and amplified.
Was this supposed to be happening?

With a coat pulled over my nightshirt,
I hurried downstairs like a child
who wakes to snow or a flurry
of meteors, sure it won’t last
and needing to see. In the freezing air,
my little alley blazed like a forge:
each brick of each wall gleaming
like a perfect square of light,
each bolt of the trestle in blistered
high relief, while all
the grains of the asphalt
flickered and flared. I watched
for a while—alone, though nobody
could have slept through it. I think

I’d expected to see this woman
I’d often seen, who was always there
in the arch of the door whenever
I came back late, leaning against
that wall, always wearing
the same red jacket. Each time,
she’d give an acknowledging flick
of her cigarette hand, a half-nod,
a half-smile that barely
parted her lips. I could imagine
how the new orange light
might thread her black braids
and shimmer the skin
around her freckles,

and how the small glow
of her cigarette might
answer that fire, how
the smoke on her breath
might catch that light for a moment
and twirl it in the air
between her and the train,

and that I might say something
to make her turn, cause the light
to glance across her piercings
and briefly edge the gap
in her teeth. Then we’d have been
silent, only looking sideways
from time to time, daring each other
to see what we were seeing.

Later I heard her called Felicia.

One day Mnemosyne suddenly parted a curtain
And stood there in front of you and said
Will you hold this basket of Japanese pears,

And you did not say no. Your arms dipped
With the weight, they smelled musty-sweet
Mixed with salt from the hands that picked them.

She said will you have the late light falling
Through a distant window, crossing the dust,
Changing and changed by it, spinning a slanted

Yellow ghost that trembles with the shadows
Of passing birds, and you saw it trembling.
She said will you bear the blue of the Aegean

Or the Ionian or possibly the Tyrrhenian
For ten years, each drawn impossibly long
By the thought of home, and you did not say.

She said will you take this sleepless night
And the deepening ache at the back of the socket
Where images drag themselves over and over,

And every joy, every sweetness,
Every inconsolable terror on this earth
I will press into you the second you meet my eye,

And what could you say. You’d heard your name.
You’d learned to read. You knew about poetry.
Your mouth was full of her materials.

These are the small days. Night reaches in
in the middle of afternoon, pulling it shut
hours before the sun draws down the sky.
You walk huddled into yourself through rain
and no rain. Morning slips further and further
back on the dark where sleep deserted you
and the clock offers only bad news,
and when dawn comes, it sits like a frost
that is heavier than a year of snow, heavy even
as the shadows your eyes have gathered
with their long staring. These days are diminishing,
drawn down and toward a final shutting,
a private solstice. Yes, they will open again:
the fires and flares of October are coming,
gold paths through flickering forests, broad hours
with the languorous joy of happier dreams;
the meteor streaks of November are coming,
the Leonid fragments are already on their way
through their own lonely circuit, arriving to cross
an unclouded sky of late constellations
and the warm breath that rises from reddened faces.