Terry Berlier is an interdisciplinary artist who works primarily with sculpture and expanded media. Her work is often kinetic, interactive and/or sound based and focuses on everyday objects, the environment, ideas of nonplace/place and queer practice. She is currently spending her sabbatical from teaching as an artist in residence at Recology San Francisco aka “the dump” where she will have an exhibition of scavenged materials in January of 2012. She will also be doing another artist in residence in Norway in June of 2012. She has exhibited in solo and group shows both nationally and internationally including the Contemporary Jewish Museum of San Francisco, Richard L. Nelson Gallery in Davis CA, Center for Contemporary Art in Sacramento, Kala Art Institute Gallery in Berkeley, San Francisco Arts Commission Gallery, Natural Balance in Girona Spain and FemArt Mostra D’Art De Dones in Barcelona Spain. Her work has been reviewed in the BBC News Magazine, San Francisco Chronicle and in the book Seeing Gertrude Stein published by University of California Press. Her work is in several collections including the Progressive Corporation in Cleveland Ohio, Kala Art Institute in Berkeley California and Bildwechsel Archive in Berlin Germany. She has received numerous residencies and grants including the Zellerbach Foundation Berkeley, Arts Council Silicon Valley Artist Fellowship, Michelle R. Clayman Institute for Gender Research Fellow at Stanford University, Recology San Francisco, Hungarian Multicultural Center in Budapest Hungary, Exploratorium: Museum of Science, Art and Human Perception in San Francisco, Arts Council Silicon Valley Artist Fellowship, California Council for Humanities California Stories Fund and the Millay Colony for Artists. She received a Masters in Fine Arts in Studio Art from University of California, Davis and a Bachelors of Fine Arts from Miami University in Oxford, Ohio. She currently is an Assistant Professor in the Department of Art and Art History at Stanford University.

A commitment to remain human in an increasingly changing and hybridizing world, culture, and home is what helps me negotiate my place interpersonally and relationally to my studio practice and production as an artist. As innovations alter how we perceive and interact with the world, are we coming closer to or farther from understanding each other and the world around us? In continually mining this question I find the memory of time and history preserved in the natural environment surrounding us as a major theme in my practice. The traces and clues discovered in this investigation reveal quasi-cyclical patterns of the past and remind us at the same time to question how we might use that evidence to ethically move forward. My work seeks to dissect and map the fabrication of time to expose and manipulate our understanding of cultural and environmental histories. These are spatially configured through audience interaction with sculpture that incorporates sound, video, installation and drawings. Found materials, technologies that are both vernacular and modern, and detritus from everyday life are appropriated or subverted and humor is embedded in the material and content. When I was growing up my father’s workshop was in the room next to the toy room. The door between the two was always open and I did not distinguish any boundaries between the two—toys and tools, playing and making, girls and boys.

While in residence at Recology San Francisco (aka the dump), I made this piece from salvaged materials. This piece is based on acoustic locator devices used for military purposes in WWI before radar rendered them obsolete. The devices were used for the passive detection of aircraft by picking up the noise of the engines. Horns give both acoustic gain and directionality; the increased inter-horn spacing compared with human ears increases the observer’s ability to localise the direction of a sound. (Photo credit: Henrik Kam)

This piece plays with the technique of physically turning these original architecture pieces made of wood by continuing to spiral their forms in a sort of collapsed home form similar to a staircase. This piece was also made while in residence at Recology San Francisco and directly refers to the high volume of waste associated with home construction as well as foreclosures. The piece makes reference to the instability of the idea of the ‘American Dream’ and the idea of a home. (Photo credit: Henrik Kam)

This piece reconfigures the well known solo instrument into a circular and group playing device. All materials were salvaged from the San Francisco dump including a working ibook computer, upright piano parts and a dell computer keyboard micro-controller. (Photo credit: Micah Gibson)

Partially as a response to the recent nuclear plant catastrophe in Japan and in consideration of the United States massive storage of over 65,000 metric tons of nuclear waste. The installation uses visual elements drawn from found web images of spent nuclear storage facilities. The installation is not meant to be a literal representation of this imagery but rather an interpretive experience that considers the confluence of “open secrets”, dependent cycles of man-made energy and the incapacity to fathom the time that is calculated when accounting for the storage of nuclear waste. Playing with notions of time and space, via the illusion of extended space created by a blue neon sculpture with mirror, implies infinity and the time needed for nuclear rods to become harmless. Other sculptural elements physically and metaphorically reference the fuel rod containment systems. Sculptural elements, including a standard household light bulb that performs a kinetic loop suspended from the ceiling, act as a silent reminder of the cyclical nature of energy consumption, waste and invention. Commissioned by the San Francisco Arts Commission Art Gallery. (Photo credit: Tammy Rae Carland) 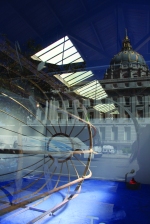 This piece represents the cross sections of two trees, a familiar reference to nature’s clock and a dramatic visualization to time. This large-scale installation illustrates that the life-span of a tree is measured in centuries, and by inference, reminds us that human life is most often measured in decades. In a fast-paced, short-attention-span culture, this vivid reminder gives us pause. The “clocks” also reference Felix Gonzalez Torres Untitled (Perfect Lovers) that is comprised of two synchronized clocks that inevitably become out of synch. Similarly, my piece serves as a symbol of time’s inexorable flow. (Photo credit: Tammy Rae Carland)

“The title of this piece evokes a sound-making mechanism to tune human beings and put them in harmony with one another on a global scale. Gertrude Stein’s novella Many Many Women provides the script for this sound sculpture, which consists of 242 telephone speakers—one for every country or territory in the world—wired together for form endless loops of transmission. The speakers broadcast Stein’s mantra-like text -anyone having been that one is the one that one is.’ Three different recordings circulate. The first is of Stein’s original text read in English. The second was created using software to translate the text successively into the languages of the countries involved in World War I and World War II, and finally back into English, incorporating the resulting distortions. The third version of the recording relays the text through the current year’s most prevalent languages from English to Chinese to Spanish to Arabic to Portugese to Japanese and back to English. Terry Berlier’s piece frees Stein’s words from their preserve on the printed page, affirming that hers is a living language, meant to be spoken, heard, repeated and reconfigured endlessly in new contexts.” —Tirza True Latimer 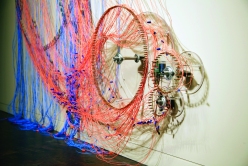 This piece comments on the weight both culturally and environmentally on consumer and a consumption-based society. (Photo credit: Jeremiah Barber)

This piece uses salvaged wood to create a tree cookie and a fragmented sense of time.

Pan Lid Gamelan II is constructed out of twenty-one brushed metal repurposed kitchenware pan lids and is based on the homophobic Jamaican saying that “two pan tops can’t meet”. The pan lids are on a horizontal rod that are reversely arranged and can be played with a variety of tools including mallets, bows and wire brushes.

The piece uses the environmental phrase “tipping point” to create an uncomfortable situation where the sculpture appears to almost fall over. The piece uses MAX programming and a Wii remote to keep the video water level while the structure rocks back and forth with the axes’ counterbalancing force.

This piece began while reading Tim Flannery’s book The Weather Makers, (2005) on climate change. This is a quote— “Scientists have discovered that innumerable miniature recorders of temperature, salinity, and other environmental conditions lie buried in the vertical mile or more of fossil-bearing rock intersected by the drills. If you know how to read them, you can play the climatic history of our planet that they encode much like a pianola roll. And, like a pianola, the most captivating rhythms and melodies emerge when information from the cores is fed into the right machines.” This device creates sound from handmade pseudo core samples depending on the color change and depth. The piece references scientific interpretations and plays a sort of fantastical climatic history. 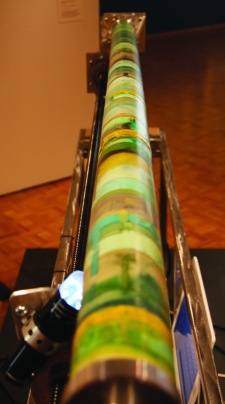