Jeremiah Barber is a visual artist and writer based in San Francisco, California. Through artistic action he investigates themes of memory and body decay, perseverance, and transcendence. He completed an MFA in Art Practice at Stanford University, where he is a Visiting Lecturer in Experimental Media Art. A former member of Marina Abramovic’s Independent Performance Group, he has exhibited nationally and internationally, including at the Museum of Contemporary Art, Chicago, the Chicago Cultural Center, the Museum of Contemporary Photography, and San Francisco’s the LAB. His writing has appeared in KQED Arts and Art Practical. A recent collaboration with the theater duo Sean Donovan and Sebastián Calderón Bentin, 18 1⁄2 Minutes, will appear this summer at the Performance Studies International Conference.

I am a visual artist based in San Francisco, California using sculpture, video and performance to explore the borders and boundaries of the body. Each performance is a singular experiment. Can I cast a cloud of smoke in the shape of my head? How long can I drag my lover through the desert? Themes of perseverance and body decay are born from my earliest memories—raised in a devoutly religious household, the body and time were merely stepping stones toward a bodiless and timeless afterlife. My artwork is a palimpsest drawn from scientific studies of outré brain phenomena, personal mythologies, Native American literature, and mystical poetry. The artifacts of my performances are thus charged by polarity: the objectivity of the photograph paired with materials handled and worn, errata of a body passing through time and dissipating.

An attempt to send a lantern in the shape of my head off into the sky. 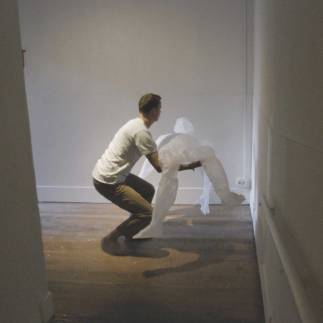 Incline Gallery is a space made up of three long ramps that were formerly used to push bodies up to a morgue on the second floor. For this performance, I carry a negative version of myself through the gallery and set it afire at the top.

Dreamburn was one of several installations in a house in San Francisco’s Marina district that, shortly after the exhibition, was demolished. The house was built in 1876. The artists were instructed to use only materials found on site. For this project, I flood the basement and carry in a negative version of myself to be destroyed. Dreamburn was captured on 16mm film by Christian Gainsley and John Rory Fraser, with sound by Ryan Malloy. Dreamburn is a Highlight Gallery off-site project, and was partially funded by an Emergency Grant from the Foundation for Contemporary Arts in New York. 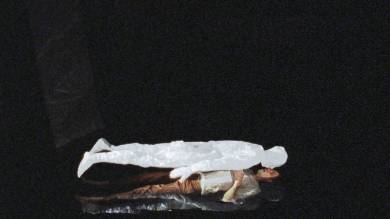 I construct a giant head to the dimensions of my own, at a scale of ten, from redwood, vinyl, cotton and monofilament. I sew myself inside and move it from my studio to the University gallery, 2 miles. The head and I collapse in parallel. 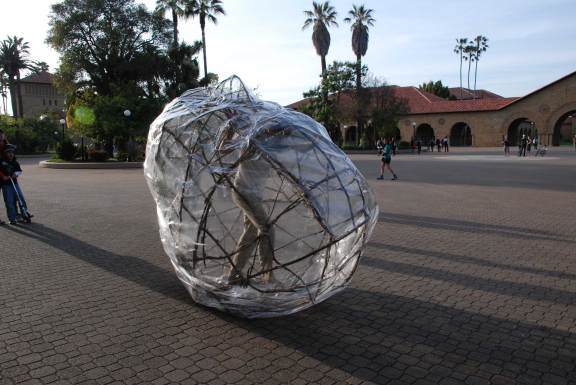