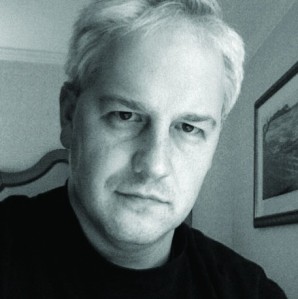 Gabriel Welsch is author of the poetry collection, Dirt and All Its Dense Labor (2006). His poems, stories, essays and reviews appear in New Letters, Georgia Review, Tar River Poetry, Harvard Review, Chautauqua Literary Journal, Ascent, Mid-American Review, Isotope, Missouri Review, The Southern Review, Birmingham Poetry Review, Sou’wester, and several other journals. He has won a Pennsylvania Council on the Arts Individual Artist’s Fellowship for Fiction, was the inaugural Thoreau Poet in Residence at the Toledo Botanical Garden, has taught at the Chautauqua Institution’s Writer’s Center, and has been nominated four times for a Pushcart Prize. He works as the vice president of advancement and marketing at Juniata College, and lives in Huntingdon, PA, with his wife and daughters. His new book is available here.

Born under the dusk’s first bats, an evening in a field,
as they rivered the humid air over where her mother
had fallen, woodside. Emma Jones had crashed

her daddy’s pickup avoiding a deer ghosted from corn—
and had pressed her belly into the prong of wheel.
Stunned womb, and though she ran

her daughter Jewel saw the world field first,
helped into the summer rye by a farmhand who’d answered
the call of what he thought was a wounded lamb.

Dog bay and wing flap, road rush and gravel scar,
she learned her world the way she knows most women do:
blunt end first, then a helping hand

neither foreseen nor earned. And oh—
that hand’s surprise at who he helped. How bold his brow,
how fleet his feet, how sudden the dust rising in his wake.

The only man I ever met
who didn’t terrify me—
not even a bit. My sister
says that’s probably the source
of the inertia.

He packed his passenger seat
with things, to prepare
for when my attention
made them treasures.

He told me little: a father
dead, he glad of it. Spare
and melancholy rooms
he never let me visit. A sister
somewhere.

He never said it, but coral
grew through his spine,
ivy at his heart, long grass
behind his eyes—

the reach of his hands
barely more than accident,
his hope to grow over and
disappear by being within.

He is a song I remember
while driving, a matchbook
in the back of a drawer. A dime
in the couch. He is a post card

from any beach, the surf known
and familiar, under a name
you can’t pronounce.

Granola Jones and the Telemarketer Meet in the Hall

Most days start with blood.
The diabetic in the apartment
across from me trembles in a housecoat
on her balcony, pricking what is
that day her least callused fingertip.
She packs herbs in wax paper sachets
for her son, a priest, who gives them
to the women of his parish. This, too,
she does on her balcony, under
the watching eye of God.

Or so she says. Next to her
a man her age spends most afternoons
obscured partly by cherry pipe smoke.
When his daughters visit, I often hear
them scold him, their voices tearing
the screen door, bright raptors in the dark
kitchen, rattling in the cinderblock
garden of sand between my wing
and theirs. Above those two

are the scholars, two young men
with hunches built with the weight
of books, though they are stout. They
eat poorly and, while I like to think
it is against my nature, I want to cook
for them, something reasonable, a meal
that would make sense to them, one
not uniform in its oily grey, its salted
pull, one not simply filling and forgettable.
They rise early, their windows gold
and thrashing with silent shadows.

In the hall, retrieving my paper,
most days I meet the teacher, bristling
with a riot of red hair and beard and the chaos
of an apartment he shares with his wife
and their new twin girls. Near to bursting,
he bustles, and his broad hands hold
a briefcase like a book, and I wonder
how children get under those hands,
how he holds chalk without crushing it,
how the board doesn’t warp at his
gravity, how he lives through the cries
I hear at all hours, how he lifts those infants
and in daylight wears the morning
like a dream of happiness he wove himself.

And for all of it, our building is still—
with windows and rooms I do not know,
and when I think about what happens here,
what lives age these rooms, the urge for sense
rages within me, and powerlessness warms
the rooms, becomes dinner, becomes aspirin
and lint and paperclips that sprout and grow
everywhere. Every syllable overheard
in the walls of this building, becomes a paperclip
looking for meaning in a clasp.

And when I see her, the voice we all here know,
the voice we’ve all heard after dinner or at noon
or among the channels we watch, she is dark matter,
she absorbs the light of the hall, a moment
bends to her will, and even the walls
bow toward her, the hallway a sudden
roiling tube, a funhouse mirror lined
in cinder block and dull carpet whitened
in a strip in the middle, and her eyes
are rimmed in shadows and ruddy wrinkles,
looking down, where her fingers twitch
tarantella, some sign of the manic bloodstream
of this building’s tremor and bustle,
and before I can greet her she says

Do you hear the voices of this building?
Do you call them and have them speak
to you in Sanskrit, or Pashto, or Farsi,
or Mandarin, or German, or Gaelic, even
English broken and pidgin, do they murder
you in words carved in a tongue, a noise
not your own? Is your demise written
somewhere, and does someone describe it
for you? Everyone here has their story
written down—did you do it?

I won’t write the story until I know the end.
How else do I know what matters?

The story makes the end, so it all matters.
You just never know what to say to your own story.

I almost ask how she gathers wisdom
about her like a patterned shawl, the flow
of flowers or filigrees hard to follow,
but I wait and consider a trail of meaning
made in my life only by loss: loss of a man
who helped build the house of my life
and who perished when it burned, or vice
versa. Loss of my womb, loss of my voice
for a year, loss of those with whom I broke
bread or tilled earth, loss of my place
in any of a number of towns, loss I tried
to outrun, loss I have come to find as my own,
the voided font of voice, loss as fuel,
a hollow engine of crushing silence,
wielded against the noise of those who deny
all that loss contains. Loss is articulate,
loss is weighty, loss is this woman,
loss is my body, power and weight,
a voice to batter. Loss fires the blood,
loss starts the day, blood fired is the day.

If she were to stay in the hall long enough,
I now know she would say, you: you
suddenly. You, in loss, know.