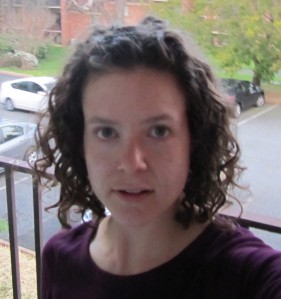 Emily Sandberg grew up in Iowa and now lives in Virginia. She is a graduate of the MFA program at the University of Virginia. Her day jobs include proofreading transcriptions of the papers of the Founding Fathers and assisting a professor with putting together his archive. Her stories have appeared in Fringe and DeComp. She is currently at work on a novel.

The bus is filling up fast, but there’s still a seat open next to me. I don’t normally take the bus, but my car is in the shop, engine trouble, and the only loaner vehicle available was a fifteen-passenger van—the Club Wagon, it was called. My own car is small, compact. I didn’t think I’d be able to maneuver a giant van around town without hitting something, or worse, someone. So I passed on the Club Wagon, took the bus instead.

And now I can’t stop thinking about this one particular incident—it happened on a bus some time ago. A man took out a knife and sliced off the ear of a sleeping woman seated next to him. They were strangers, traveling across the country together. She woke up, started to scream, and he stayed calm, took out a Ziploc, slipped her ear into the bag. I don’t know what he planned to do with it, the news didn’t say. It ended with the other passengers wrestling the knife away, restraining him until authorities arrived.

I wonder what made him cut off her ear. What was he trying to say? Maybe nothing. Maybe: My brain isn’t working right; my neurons are misfiring; my mental chemistry is out of whack. Had he been trying for a long time to say something, only nobody would listen?

Van Gogh and his famous ear: If he’d given it to me instead of that prostitute Rachel, I like to think I’d have listened and done what he’d asked—kept the ear safe, guarded it for him. Because he would’ve been giving me more than just part of his ear—also a feeling of we’re in this together. I would’ve reveled in my new role as keeper of the ear. Because of his colors, his lines—I don’t know much about art, least of all how to talk about it, but I feel something when I look at his sunflowers, his night-sky, his self-portrait, as if I’m somehow connected and receiving the answer to a question I’ve had for a long time without even knowing I had it. I like to think we would’ve connected in person. Vincent and me. That I would’ve been different from everyone else he tried and failed to connect with—the women, Gauguin, the people of Arles. If only I’d been born at a time and place to encounter him…but even then, I know things might not have played out the way they do in my head. I might’ve found him insufferable. That alternate theory—Gauguin slicing off van Gogh’s ear during a fight—I might’ve sympathized with Gauguin. Even under the prevailing self-mutilation theory: I might’ve found the gesture disgusting and reacted with horror just as Rachel did, my name appearing at the top of the petition to run him out of town.

Possibly Gauguin and I would’ve run off to Tahiti together and lived there until he tired of me, everything I represented, and left, just as he did with his wife. He’d shack up with some native woman, bare breasts, grass skirt, and there I’d be, alone, preparing fresh fish and fruit meals for one.

Then, too, it’s possible neither man would’ve wanted anything to do with me, and I should concentrate harder on finding someone among the living. But still, in my mind, there’s Vincent, holding out the box lined with tissue paper, his ear nestled inside like a gift, asking…

There’s a man waiting in the aisle, wanting the empty seat next to me. He’s tall, lanky, dressed in a t-shirt and jeans, silver rings in both ears. I let him have the seat.

“Wanna hear my great idea?” he asks, as the bus lurches into motion.

He shifts in his seat so that he’s facing me directly. “You know how cars have those warning lights on the dash? Well, I think people should have them too. So if something isn’t right with, say, your liver, a little liver-shaped light shows up on your forehead and you know to get to a doctor. A different light for each body part—heart, kidneys, lungs, gallbladder, pancreas, brain…everything.”

I’m not sure what to say. I think of the first car I ever had: the engine was fine; it was the ‘Check Engine’ light that gave me problems—it would come on and stay on, and after having a mechanic tell me on three separate occasions that there wasn’t anything wrong with my car, I finally just stuck some black electrical tape over the light so I wouldn’t have to look at it anymore.

I think about mentioning this to the man next to me, but before I’m able to, he presses the button for a stop, gets up, moves off down the aisle, as if he’d boarded the bus just to tell someone his idea. Crazy, though not scary-crazy in the slice and bag your ear kind of way. I imagine that woman waking up: the pain, the blood, the little ear-shaped light blinking on her forehead, grotesque in its obviousness. Had I been in her place, first off, I wouldn’t have gone to sleep. I couldn’t have gone to sleep; really, I’ve never been able to sleep in public places. So when he came at me with the knife, I’d be up for it. I’d try to talk him out of it, convince him it wasn’t an ear he wanted, and if that didn’t work, if he was really set on an ear, then I’d take the angle that it wasn’t my ear he wanted. See how the lobe doesn’t hang exactly right? That mouse—the one with the human ear growing on its back—it was in the news some years ago. I’d suggest he get one of those, an earmouse. I’d like one myself, I think, a listening mouse. I’d keep it in a cage on my desk and talk to its ear in my regular voice.